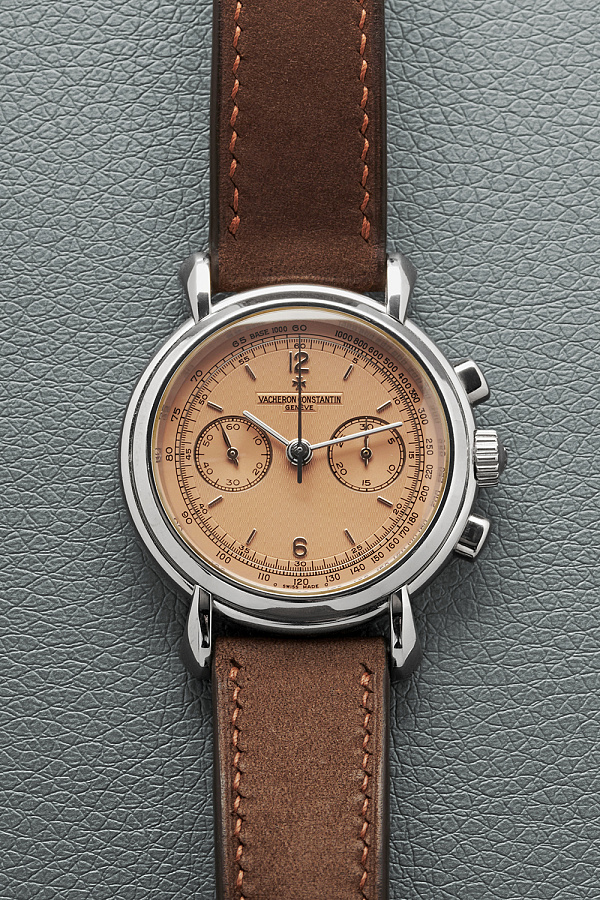 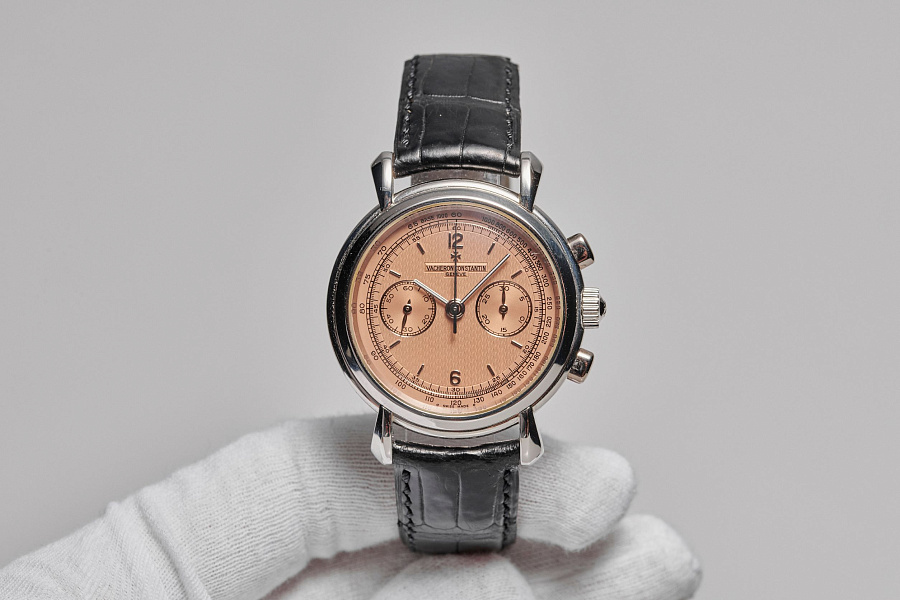 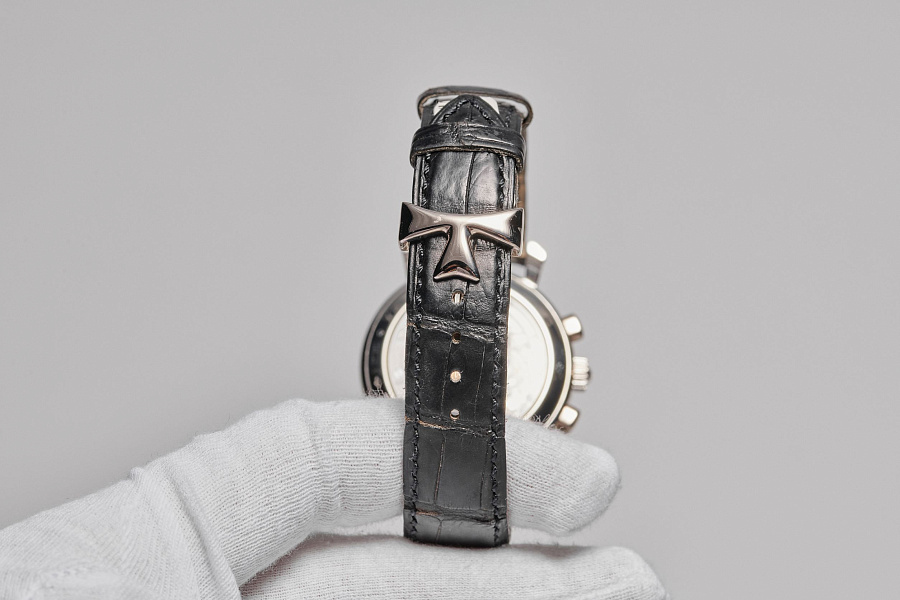 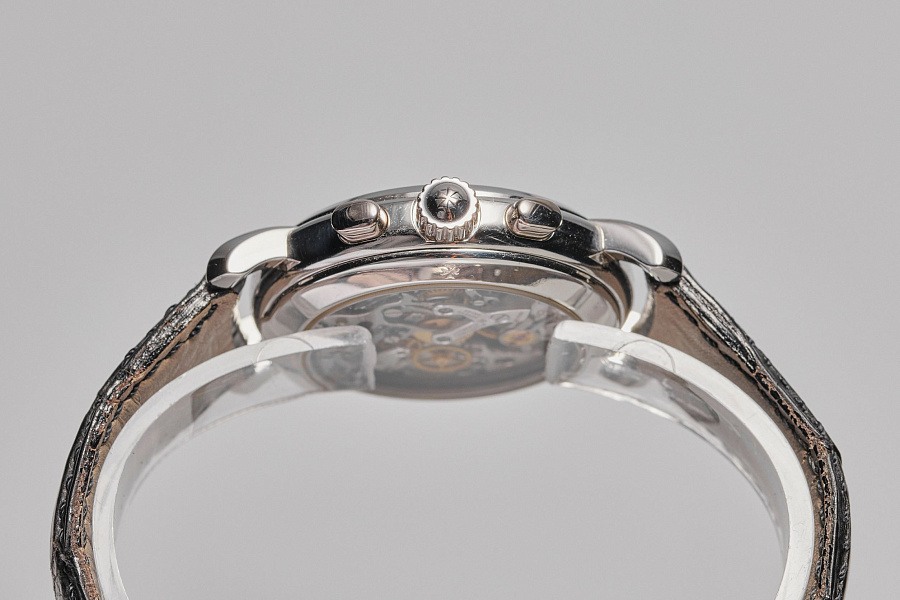 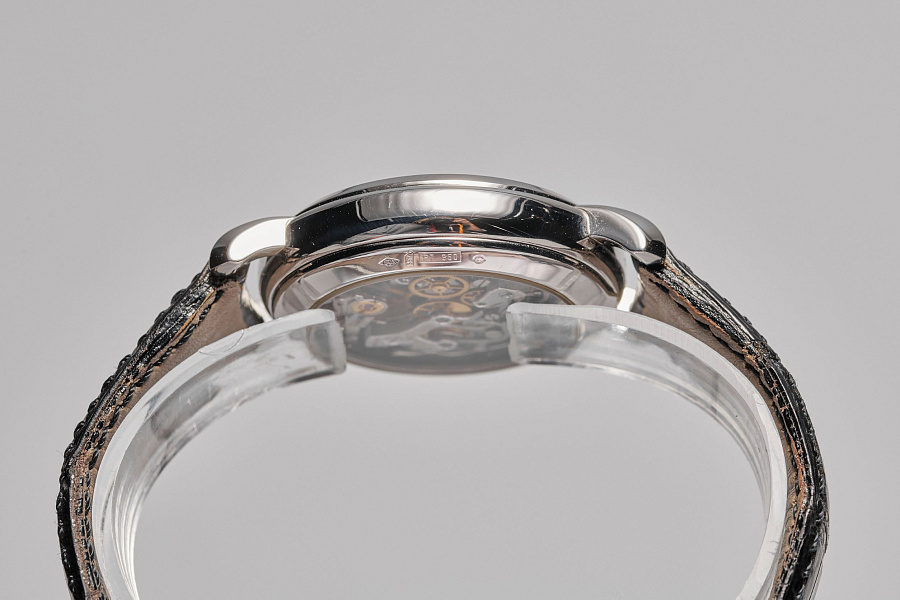 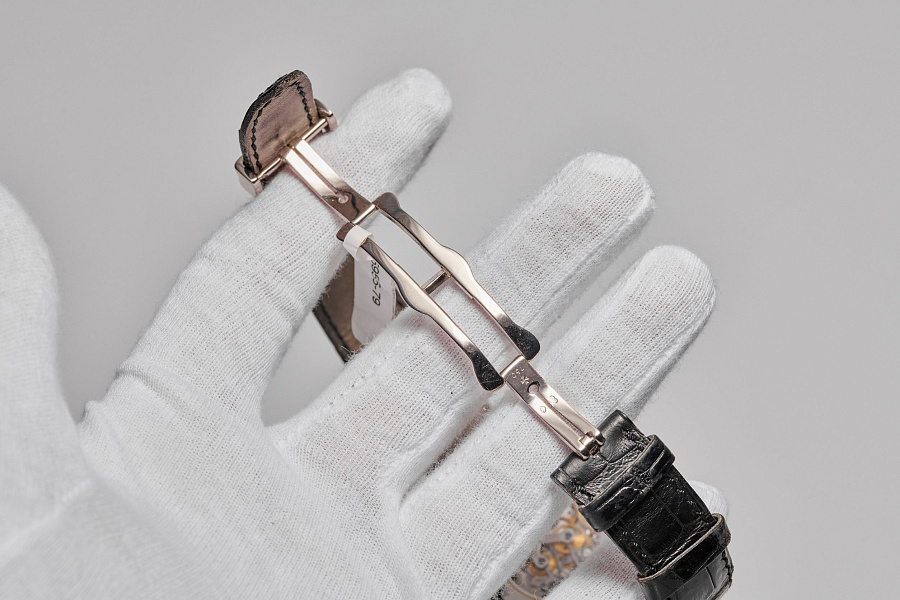 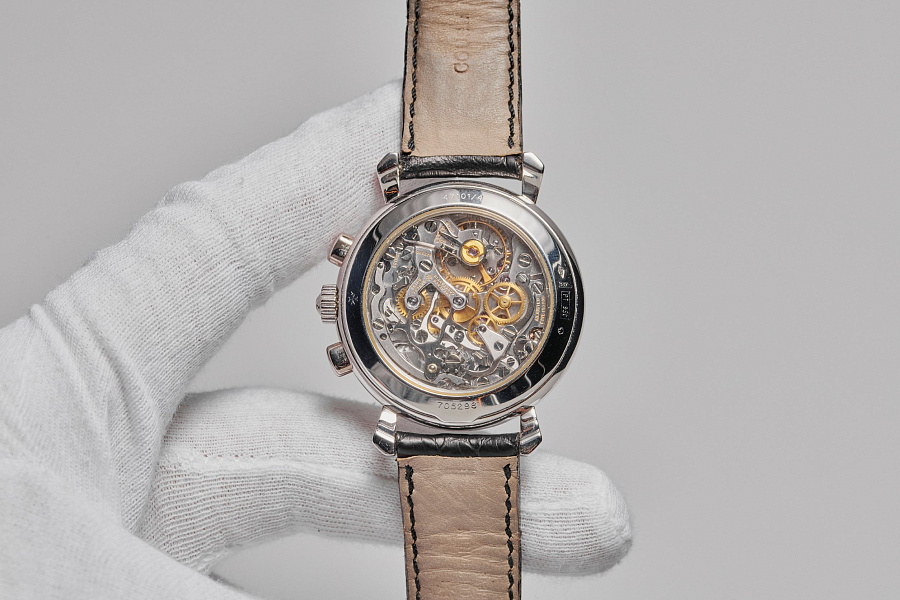 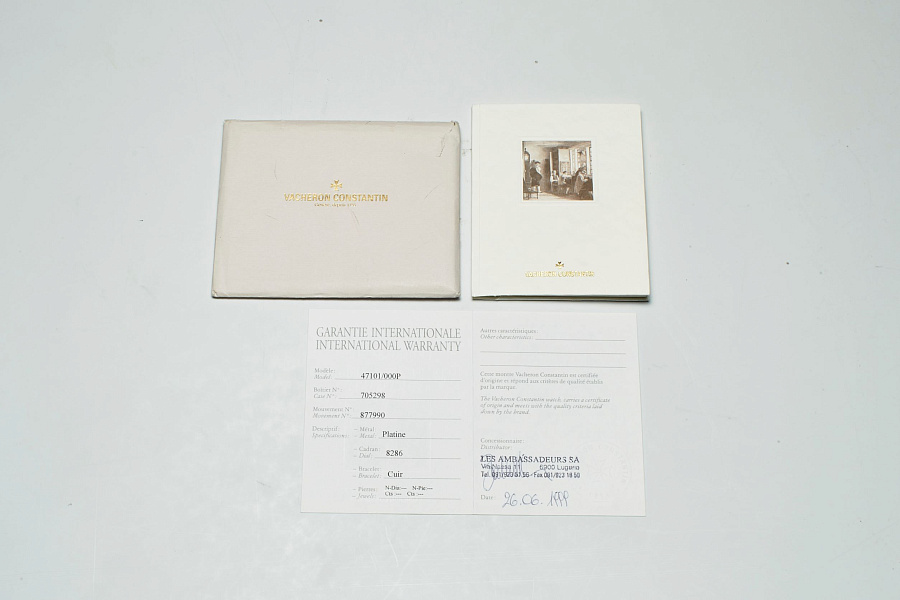 The present reference is unquestionably one of the finest and most attractive traditional hand-wound chronographs. It was introduced in 1989 as part of Vacheron Constantin’s Les Historiques collection, created as a tribute to the Geneva watchmaker’s long and established tradition of making fine pocket and wristwatches. The origins of the present reference may be traced back to their legendary Ref. 4178 chronograph wristwatch, launched in 1940 and produced until 1964. Ref. 47101, and later Ref. 47111, inherited from Ref. 4178 its distinctive – and well known among collectors – fan-shaped lugs, and the harmonious layout of its dial with peripheral tachymeter scale and horizontal placement of the subsidiary dials. Thanks to this, Ref. 4178 is considered by many to be one of the most beautiful and refined chronographs ever made, and references 47101 and 47111 are perceived as the heirs to its charisma. From 2000 to 2004, the brand replaced Ref. 47101 with Ref. 47111, a modification featuring a caseback attached by four screws.

The present example features striking and charismatic ‘salmon’ guilloché dial, one of the most covetable options for Ref. 47101 chronographs.

Ref. 47101, chronographs without additional functions, were offered from 1989 to circa 1999. The majority were cased in yellow gold, and according to Christie’s only around 300 examples in platinum were made. There were several dial options, the most widespread being matte silver-plated, light champagne-coloured, copper-coloured so-called ‘salmon’, or black, sometimes embellished with guilloché. The present example features a striking and charismatic ‘salmon’ guilloché dial, one of the most coveted options for Ref. 47101 chronographs. Highly contrasting printed markers in a vintage serif typeface, with open 6 and 9 digits perceived as a sign of 1940s vintage style, are complemented by the crisp finish of all parts, including a flawless execution of the recessed sub-dials with a mirrored edge and a solarised finish, complementing the traditional ‘vieux panier’ guilloché. Undoubtedly, this is one of the best dials that can be found in modern wristwatches.

It is also important to note that the dial of the present example is described as a ‘sigma dial’, meaning the inscription “Swiss” at the bottom of the dial is located between two small Greek sigma letters. These indicate the use of solid gold hands and appliques.

The present example is fitted with a hand-wound caliber 1140. The movement is finished to a high standard with hand finishing of all parts, including chamfering, polishing, côtes de Genève and perlage for the bridges and mainplate. The steel parts of the chronograph mechanism are straight grinded, and the edges are bevelled and polished. The caliber 1140 is a thoroughly re-worked Nouvelle Lémania 2310/2320 ebauche, which has been used by leading Swiss brands in their chronographs. The appearance of this mechanism in Vacheron Constantin wrist chronographs in 1991 was the beginning of a new stage in the development of the collection, when the brand received a high-class movement-blank, which allowed both it and the watch created on its basis to be turned into true masterpieces of high watchmaking art. Since 1989, calibers 1140/1141 (and since 1991 their skeletonized versions), based on 2310/2320 ebauches, have been the basis for the launch of Vacheron Constantin’s excellent high-end chronographs in their Les Historiques, Malte and Patrimony Traditionnelle collections, including models with the addition of a perpetual calendar. Hourlounge reports that around 1250 pieces of Ref. 47101 in yellow gold and 300 pieces in platinum were made in total, and only a handful of platinum pieces feature the coveted salmon dial.

In our estimation, the present watch belongs to the last years of the Ref. 47101 production span, most probably, 1999–2000. The watches of this period are characterised by a particular modification of the caliber 1140 Type2, with a clearly visible sharp inner angle of the Y-shaped chronograph bridge – in the previous period the watches were equipped with Type1 movements in which the inner part of the Y-shaped chronograph bridge was generously rounded.

According to our study, the transition from Type1 movements to Type2 started around 1994, which corresponds to the case numbers’ range from 64xxxx to 65xxxx. It is important to note that this transition was accompanied by another change, when the hallmarking of the precious metal cases was changed with the introduction in Switzerland of the ‘Head of a St. Bernard dog’ seal in August 1995. This watch bears two features – a Type2 caliber and the ‘Head of a St. Bernhard dog’ hallmark, which undoubtedly increases the attractiveness of the present lot.

The situation with these watches in the current secondary market and auctions allows us to note that Vacheron Constantin chronographs with calibers 1140/1141 are clearly underestimated, and the conclusion that their attractiveness represents a successful investment does not seem misplaced.

The present Vacheron Constantin Les Historiques Chronograph Ref. 47101/4 ‘Platinum, Salmon Dial’ Type2 would appear to be an attractive and promising purchase for the collector who seeks a refined traditional mechanical chronograph of a legendary and historically important classic design from a world-famous watch brand, one of the market leaders in haute horlogerie and complicated timepieces. The undoubted advantage of the present chronograph is the outstanding technical characteristics of the caliber 1140, one of the most reliable and efficient hand-wound chronograph movements, with a lateral clutch and column wheel, combined with beautiful aesthetics and excellent hand finishing of all parts. Moreover, the present example features a platinum case of a signature design, charismatic guilloché ‘salmon’ dial and the caliber 1140 of the rare Type2 execution – all this greatly increases the perceived value of the present lot and underscores the aesthetic charisma of this design.